The butter-yellow paint barely had time to dry on the walls of her remodeled Rockland County kitchen before Caroline T. was inviting people over. “I entertained last night. I’m entertaining tonight,” says the Nyack resident. A full-blown kitchen-warming party will take place in the near future — giving the owner, an editor with a medical education company, yet another chance to try out her favorite new toy: a wine refrigerator.

Why the big rush? She’s making up for lost time. 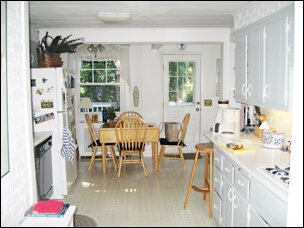 “I moved into the house in 1999 and made do with that kitchen for eight long years, but it was very outdated, and no matter how much I cleaned, it always felt dirty and cluttered,” she says. While her 1934 classic Colonial is otherwise appealing, with oak floors and an inviting front porch, the kitchen was a hotbed of bad design. Imagine dingy white linoleum floors; drawers without rollers; bulky, outmoded appliances; and (the clincher) faux brick accents on the walls.

At first, Caroline thought changing the cabinets might help, so she headed to a local lumber store, where the staff insisted that they only needed measurements to plug into the computer. “They tried to put a kitchen together without even seeing the house or knowing anything about me,” she recalls.

So she knew it was a good sign when she contacted Maggie McManus, a certified kitchen designer whom she found through online research, and McManus suggested that she come to visit the kitchen.
“Tell me your ideas and we’ll go from there,” McManus told her. So Caroline prepared a list of must-haves: more light, a wood floor (to complement the rest of the house), more light, double doors for easier access to her beloved deck (“I live there in summer”), a half bath — and did she mention more light?

Armed with this wish list, McManus started to turn it into reality. “We didn’t add on,” she says. “We just completely reorganized the space.” Thirteen feet long and 10 feet wide, the galley-style kitchen connects with a converted back porch to form an L shape. The one-time porch, which runs along the entire back of the house, is a shallow five-and-a-half-feet wide by about 18 feet long. Previously just a holding pen for golf clubs and deck chairs, the space now includes a dining area, a cookbook library, a utility closet, and the half bath Tredway asked for.

Replacing the back door with double doors not only added a focal point and a sense of balance, but brought in more light. “We had to go with sliding doors because space is tight,” says McManus, who worked with general contractor Kevin Scanlan to put it all together in an impressively short two-and-a-half months.

The kitchen itself posed greater challenges. First, there was the hulking refrigerator hogging much of the sink wall. McManus decided it had to move. This freed up the area by the sink and enabled her to double the size of the window there — allowing even more light to shine in. “Now she has a really nice work area to the right and left of the sink,” McManus says. “It feels really open.”

On the opposite wall, a cooktop and oven made way for an all-in-one range with a microwave mounted above. “By consolidating those cooking elements we were able to put the refrigerator on that wall too,” says McManus, noting that there’s still ample space on either side of the stove. “The other night, I was cooking on one side, and my friend was preparing the salad on the other,” says the owner. “What a difference.”

Maple flat-panel cabinetry is from Custom Wood Products, a smallish company in Virginia with “green” practices. Shaker-like in their styling and finished in a dusky Williamsburg blue, the cabinets have drawers with that critical feature missing from the old ones: full-extension slides. “It’s a classic, simple, all-wood cabinet,” says McManus. “In this day and age, people don’t want complicated rooms. They want an open, calm, welcoming space, so these cabinets are just right.” Satin chrome pulls and knobs for the cabinets echo the metallic theme of the all-new stainless steel GE Profile appliances and also add more sparkle to the now-sunny space. “I love it,” declares the happy owner. “It’s such a cohesive kitchen now.”

And that’s what McManus had in mind all along. “It’s a charming, cottage-style house. The kitchen is an important part of the house, and this will still look great in 20 years. No one’s going to walk in and say, ‘Oh you did that in 2008.’ It’s going to hold up. For some people, the kitchen is fashion that you can change like a scarf, but it shouldn’t be. The kitchen belongs to the architecture of the house.”