When a busy architect’s aging kitchen needed a face-lift, he called in a design specialist who took it from dowdy to delightful

In 1974, architect Michael Esmay and his wife, Lois, were a young couple with small children and a limited budget. So the contemporary, 3,000-square-foot cedar-sided house that Michael built for his family was not all they might have wanted it to be. “I called it the Great Compromise,” he says. But the site — on a bluff in Upper Nyack with sweeping views of the Hudson River — made up for whatever corners had to be cut. Michael designed the house with six levels stepped into the hillside, and almost every room opens onto a deck to make the most of the scenery. “We have a 220-degree view of the river,” he says. “It feels like a tree house,” adds Lois.

Over the years, the couple added onto their home and made improvements. But when it came to fixing up the elderly kitchen, they dithered. “Michael was so busy with other work, we kept putting it off,” says Lois. “Everything was getting so dingy and the appliances were all falling apart, so he finally said, if we’re going to get this done, we need someone to put the pieces together.”

Michael liked the kitchen that local designer Maggie McManus (who specializes in kitchens and baths) had done for one of his clients, so the couple invited her to come and consult. “The idea was that Maggie could nudge us along and she and Michael could collaborate,” Lois explains. “She convinced us we didn’t have to make big changes.”

Apart from bringing the kitchen up to date, the Esmays wanted it to be better integrated with the dining area, and to improve the storage and general organization. “I cook, and I needed a kitchen that would work,” Lois says. (Adds McManus: “When Lois says ‘I cook,’ it’s all caps, exclamation point. She’s quite the foodie. She’s got three colors of sea salt.”) The challenge was to “finesse the space and improve it logarithmically on a relatively small budget,” says McManus, who took pictures of what was in the existing drawers and cabinets to help assess what storage would be needed.

Although the floor plan remained the same, a few small structural changes made a big difference in how the fairly tight space feels. For one thing, McManus widened the entrance in the half wall between the kitchen and dining area, taking it from 39 inches to 42. “In kitchens, inches can make all the difference,” she says.

In the rarely used main entrance, a five-foot closet was closed off and made to open in the dining area instead, where it’s now a china and linen cabinet. In the back entrance, which “they go in and out of 10 times a day,” notes McManus, the mudroom got a new coat closet, and McManus recycled the old kitchen cabinets to create a pantry with a sink in what had been a small tool storage room. 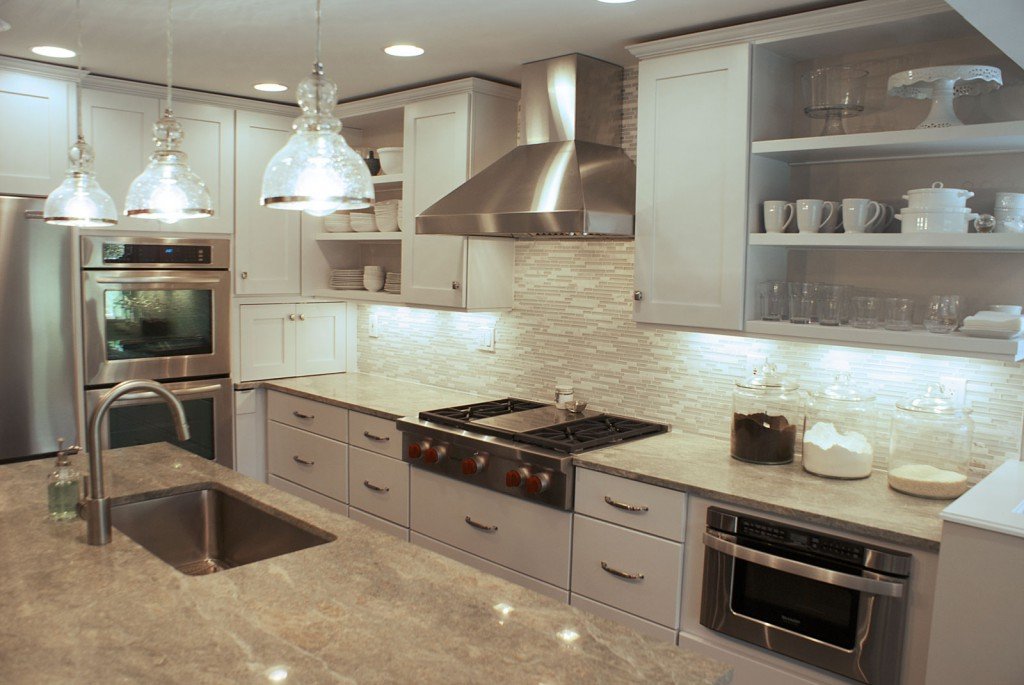 In the 14-square-foot kitchen itself, McManus left the stainless steel double sink in its original spot, but replaced the stove with a Wolfe five-burner gas cooktop (“a wonderful little workhorse,” Lois notes) and installed an electric oven to one side (“a good idea, especially if you’re using the oven in summer,” Lois adds). The Miehle dishwasher and GE Profile refrigerator are stainless steel. The backsplash of oversized subway tiles, another contemporary favorite, got a dash of pizzazz from thin, handmade vertical tiles in matte green interspersed at the joints. “It’s a very modern rhythm and aesthetic, but the materials give it that warm, Craftsman feeling,” McManus explains. Tall cabinets and under-counter drawers made of rift-cut oak were stained to match the Esmays’ Stickley furniture.

“Maggie has a really nice sense of color, and chose a color scheme that reflects the trees and bark outside,” Lois says. Mahogany trim that had darkened over the years was brightened up with a coat of alabaster white, and the walls were painted Benjamin Moore’s Minced Onion, an off-white with a faint hint of yellow-green. Woodcraft cabinets were painted a more intense yellow-green. Countertops are CaesarStone, a quartz, in a mottled blue-green/ gray color called Rosemary. “Michael and I wouldn’t have thought of those materials and colors,” Lois says. “If I’d picked cabinets, I’d have just chosen wood, and Michael was so busy he’d have said, ‘That’s nice,’ just to agree. I’m very happy that we had Maggie to direct us, to say, ‘No, this space doesn’t want granite, it’s too heavy.’ I hadn’t even heard of CaesarStone. And the green tiles make everything dance.”

The work was extensive enough that gutting the kitchen was easier than trying to do it piecemeal — an upheaval that even the most easygoing usually find an ordeal. The couple moved the old island and refrigerator into the dining area and set up camp so that Lois could cook while the eight-week project was underway. “We’re informal people, and pretty flexible. It worked out fine,” she notes. “My daughter got a Russell Hobbs electric pressure cooker and she was afraid of it, so she gave it to me. I called it Chitty Chitty Bang Bang. It had a searing mechanism to brown, you could steam things, and pressure cook — it’s the most amazing thing. I cooked great meals with it. I even made chili for a party.”

As for that vital piece of kitchen equipment, the sink: “We used the powder room during the renovation. I said, ‘No one’s going to the bathroom in there — that’s going to be the kitchen sink.’ It wasn’t so terrible. Actually, it was fun.” But what’s even more fun is finally having a stylish new kitchen that really works. “Maggie made it happen,” says Lois. “Now everything’s at my fingertips.”

Before the renovation, the Esmay’s kitchen/dining area felt cramped and dark. By moving the half wall back just three inches at the kitchen entrance, designer Maggie McManus gave the space a more open, airy feeling

McManus’ use of subtle paint colors further brightens up the kitchen space. She replaced the woodgrain cabinets and island with yellow-green painted ones, which correspond well with the minced-onion wall color. The backsplash (made from subway tiles) and CaesarStone countertops add a contrasting note, tying the whole color scheme together

In order to better integrate the dining area with the kitchen, McManus extends the wall color through into that room as well (where it coordinates with the green tiles around the fireplace). Tall cabinets and drawers under the kitchen windows are stained to match the Esmays’ Stickley table and chairs

Pretty/useful Glass spice jars, and a small collection of decorative teapots, adorn a small shelf that straddles the kitchen and dining areas.